After Borneo, it was time to head to Cambodia. We had a stop over in Kuala Lumpur again, so naturally I did a bit of shopping 😀. I discovered they had a HandM and ended up purchasing a 90s over-sized, vintage style denim Jacket. I also got a cheeky adidas T.shirt in black.

We arrived at Phnom Penh and first on the list was the island ‘Koh Rong Samloem’. This wasn’t before a four hour taxi journey to the pier. This gave us a chance to chat to our English speaking taxi driver who learnt from a dictionary and tourists, and to see what rural Cambodia is really like.
Garment factories pop up everywhere along the way and Gim the driver, seemed so angry with the investments from overseas that never seem benefit the rural communities. It seems such a struggle to live there. It made me think a lot and appreciate a lot.

I wanted to see an island here before they become massively popular with tourists. Some are already heading that way. We narrowly avoided Koh Rong after speaking to a traveller who revealed its a party island which we didn’t want. We opted for its sister Koh Rong Samloem. No roads, no  vehicles, no ATMs, no tvs, no doctors. Early in development, it was bliss. We had a duplex beach hut to stay in where a little cat greeted us and slept on our bed while we were out. 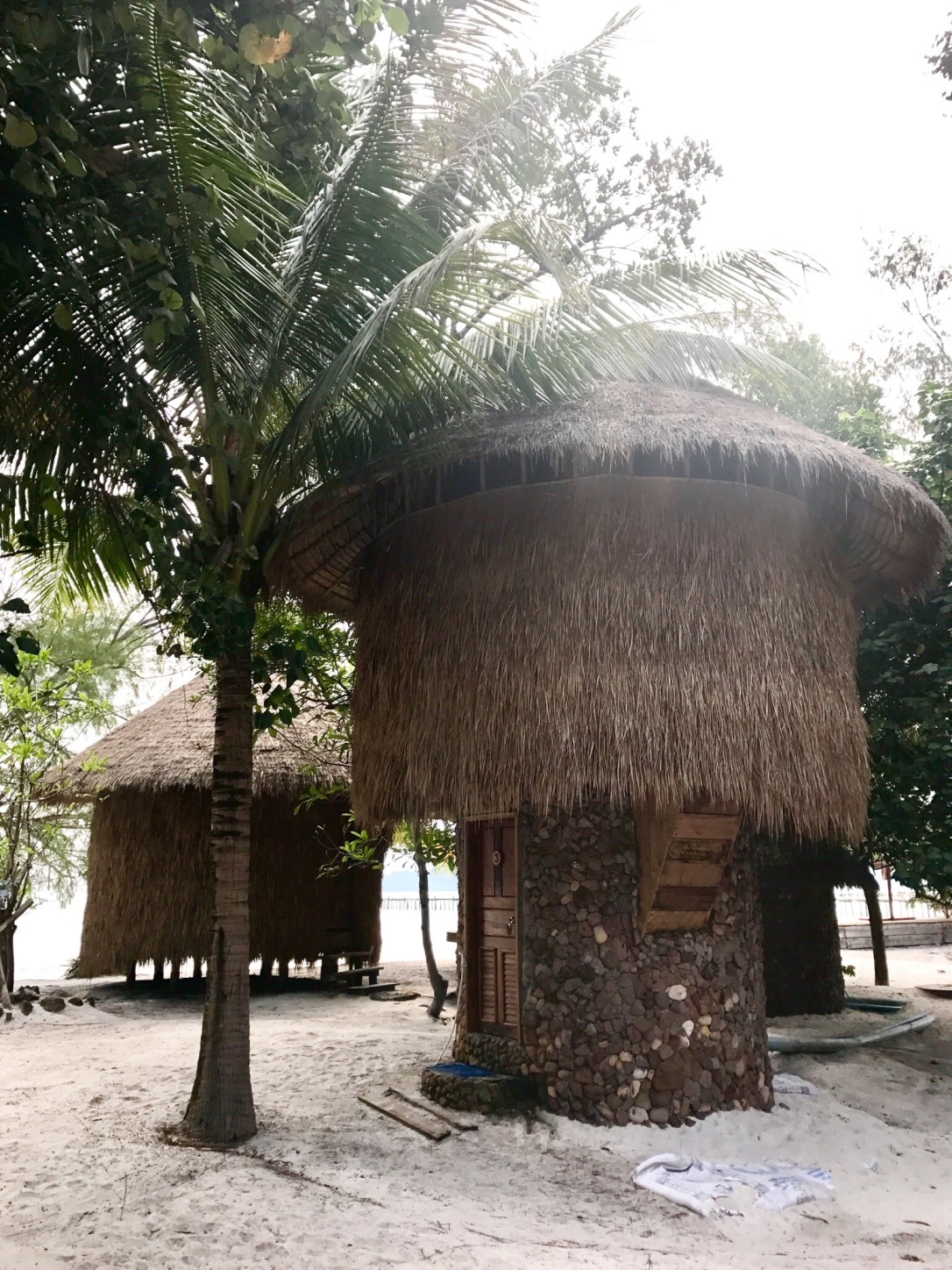 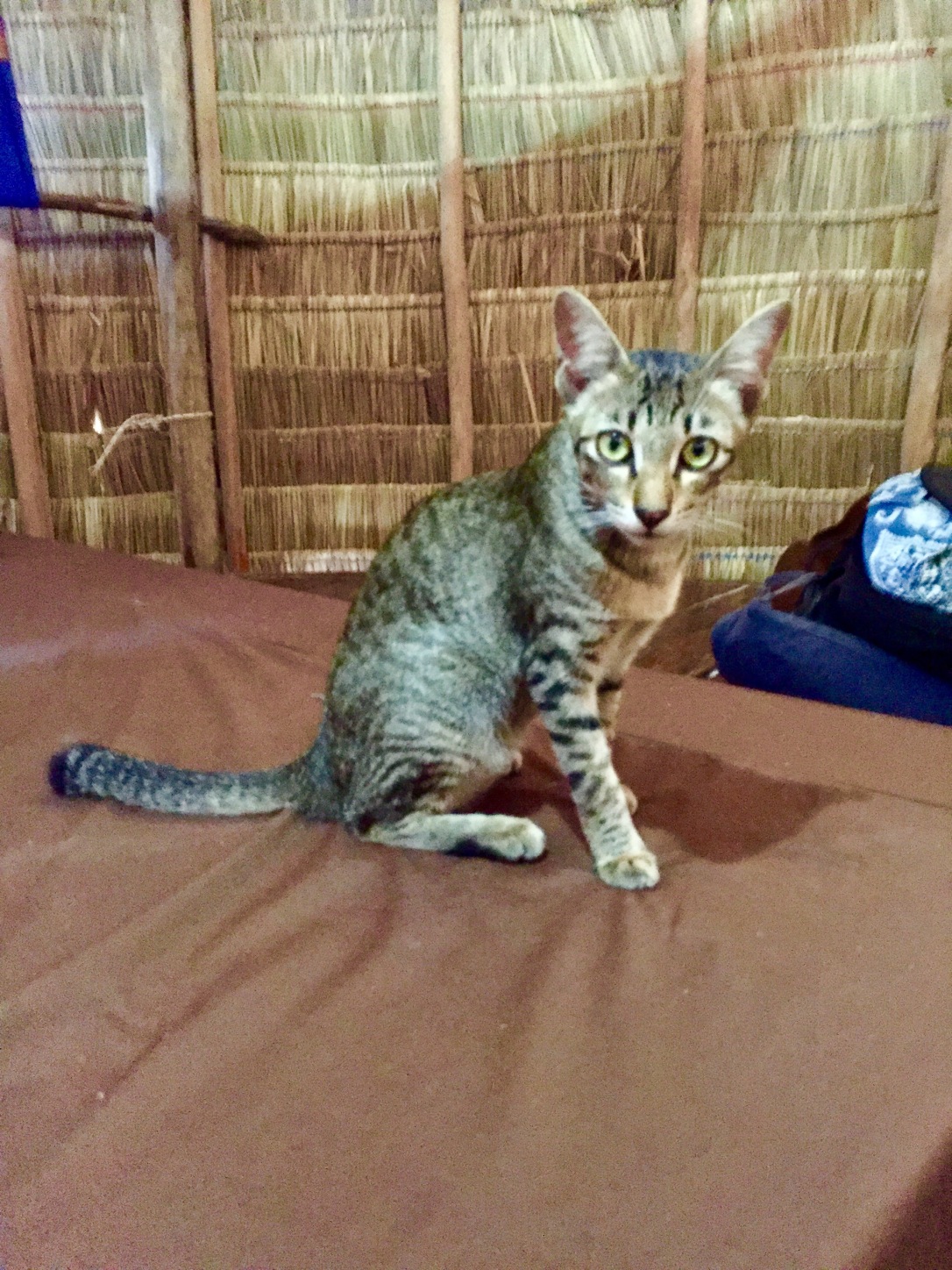 With not much snorkelling compared to Thailand we just relaxed and did a jungle walk through to sunset beach on the opposite side of the island. Again, naughty marcaque monkeys paced around their territory, eyeing us up. An American guy was so terrified of them he asked if he could walk with us. “That’s a big worm” he said five minutes in pointing to a pile of dried leaves, only for Richard and I to realise it was a bright red juvenile snake. Camera time!

Another wildlife highlight was a weird looking starfish…. see picture! 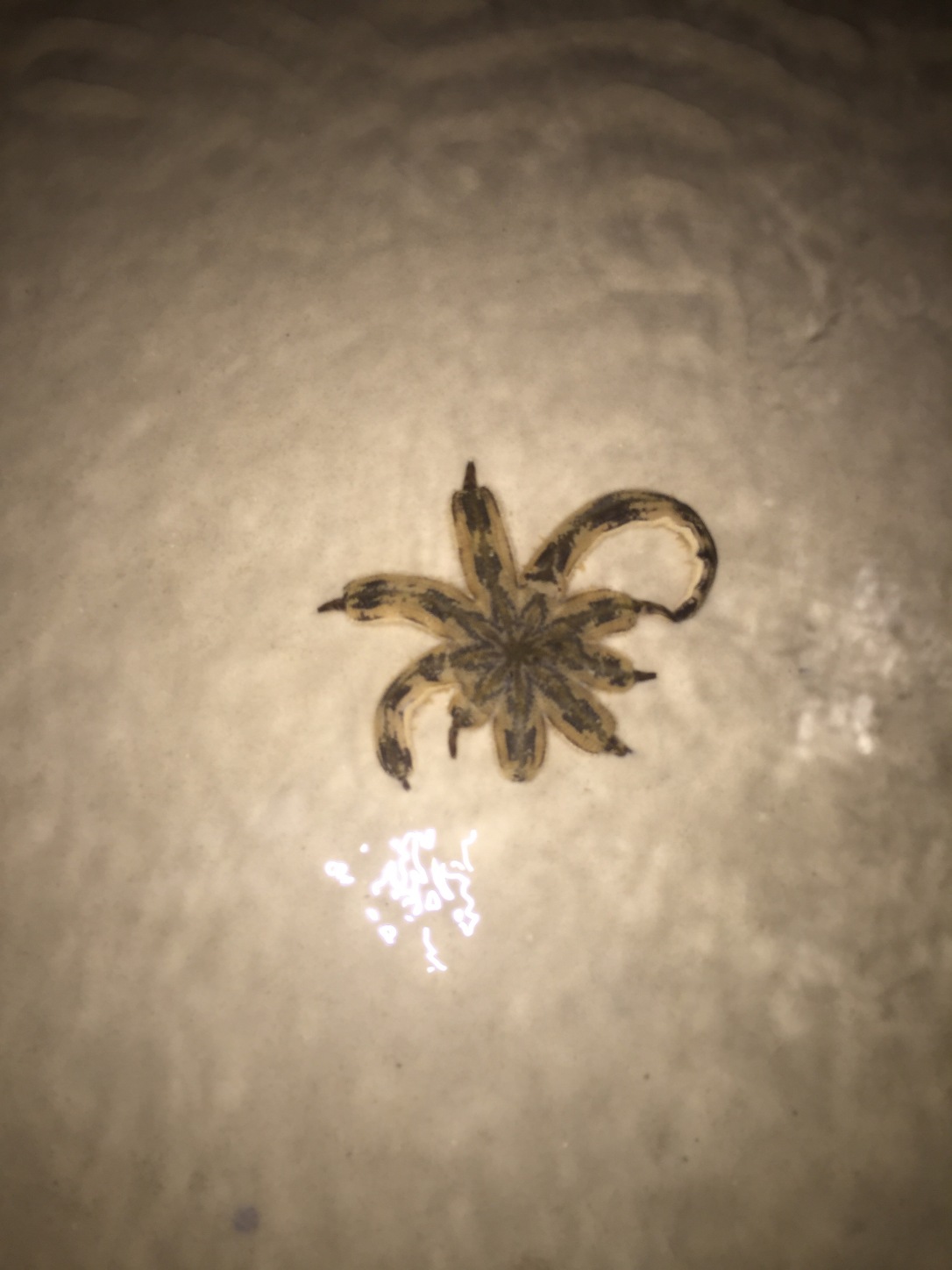 The Cambodian style of food Khmer, is a cuisine which consists of numerous herbs, leaves, pickled vegetables, dipping sauces and edible flowers. A popular dish is Amok, which we loved. They also like to BBQ. Below is a barbecued red snapper. 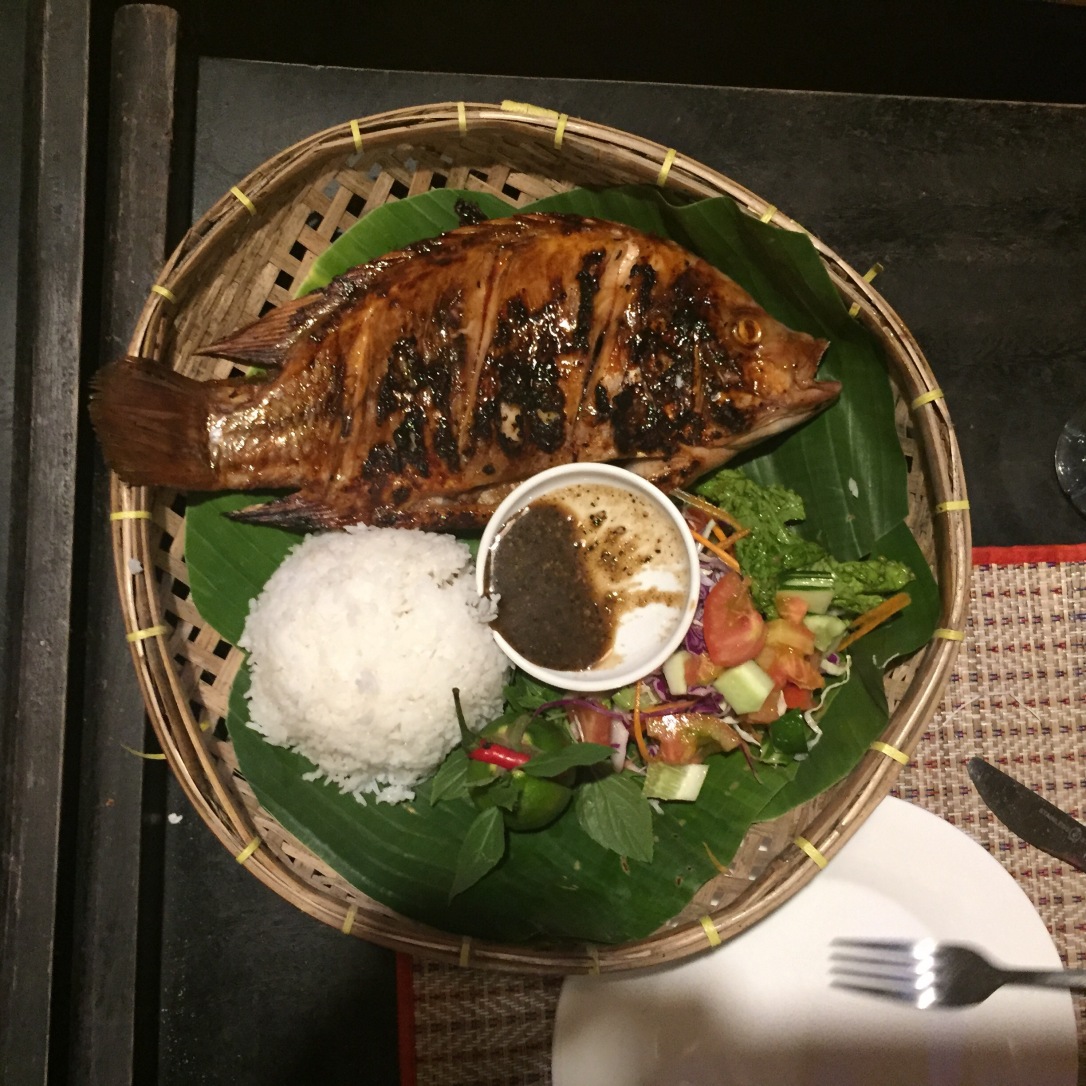 Arriving back in Phnom Penh was a shock to the system. It’s a busy, bustling, hot and polluted city, where motorcycles and tuk tuks just dangerously slot in like tetris! Something we aren’t used to at all. 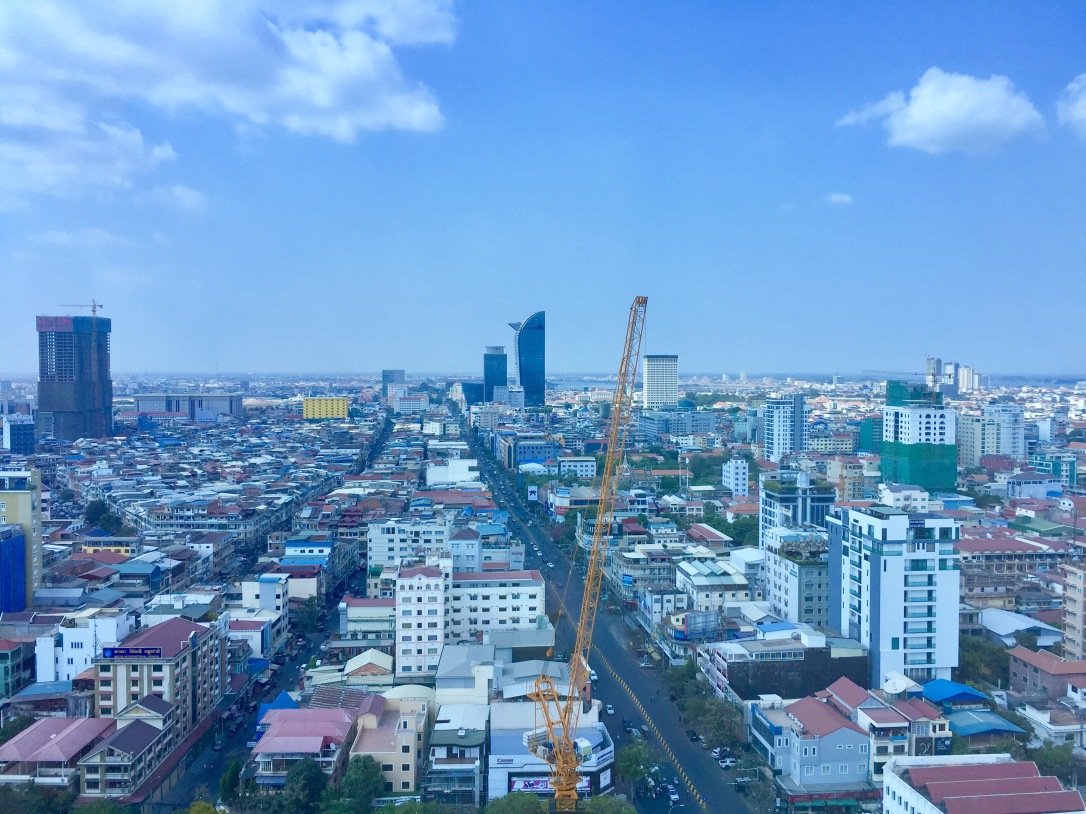 What also shocked me was the many, many families who are homeless, just showering and sleeping all night in the park or on the street. Then you’ll turn a corner and there will be a hipster, vegan, raw food cafe or a cosmopolitan cheese and wine bar! The contrast is remarkable.

We browsed central market, which is a gigantic  market of everything you can think of. I noticed a lot of brand copies, very good copies actually but you have to think back to the garment factories we passed and the working conditions. 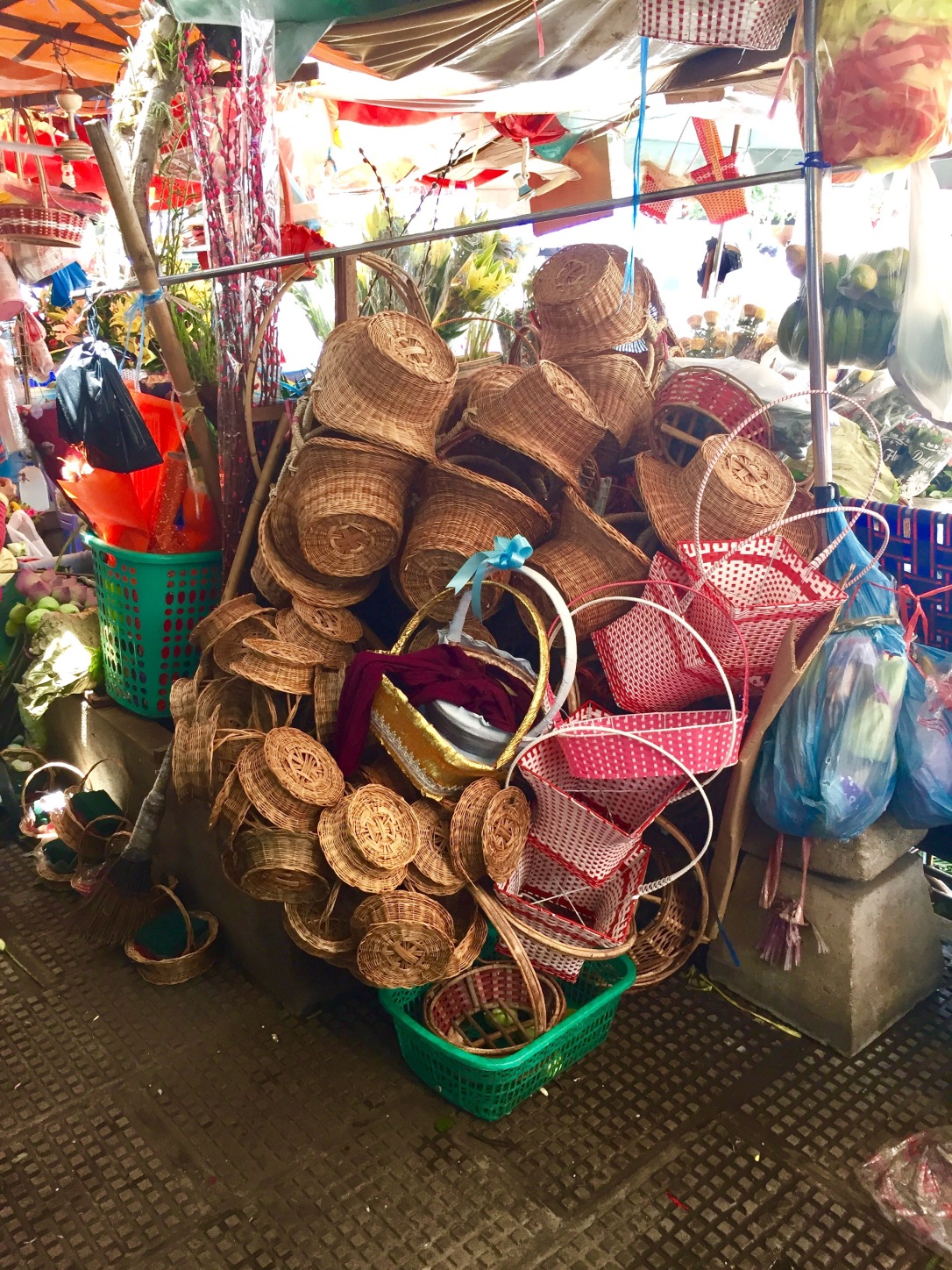 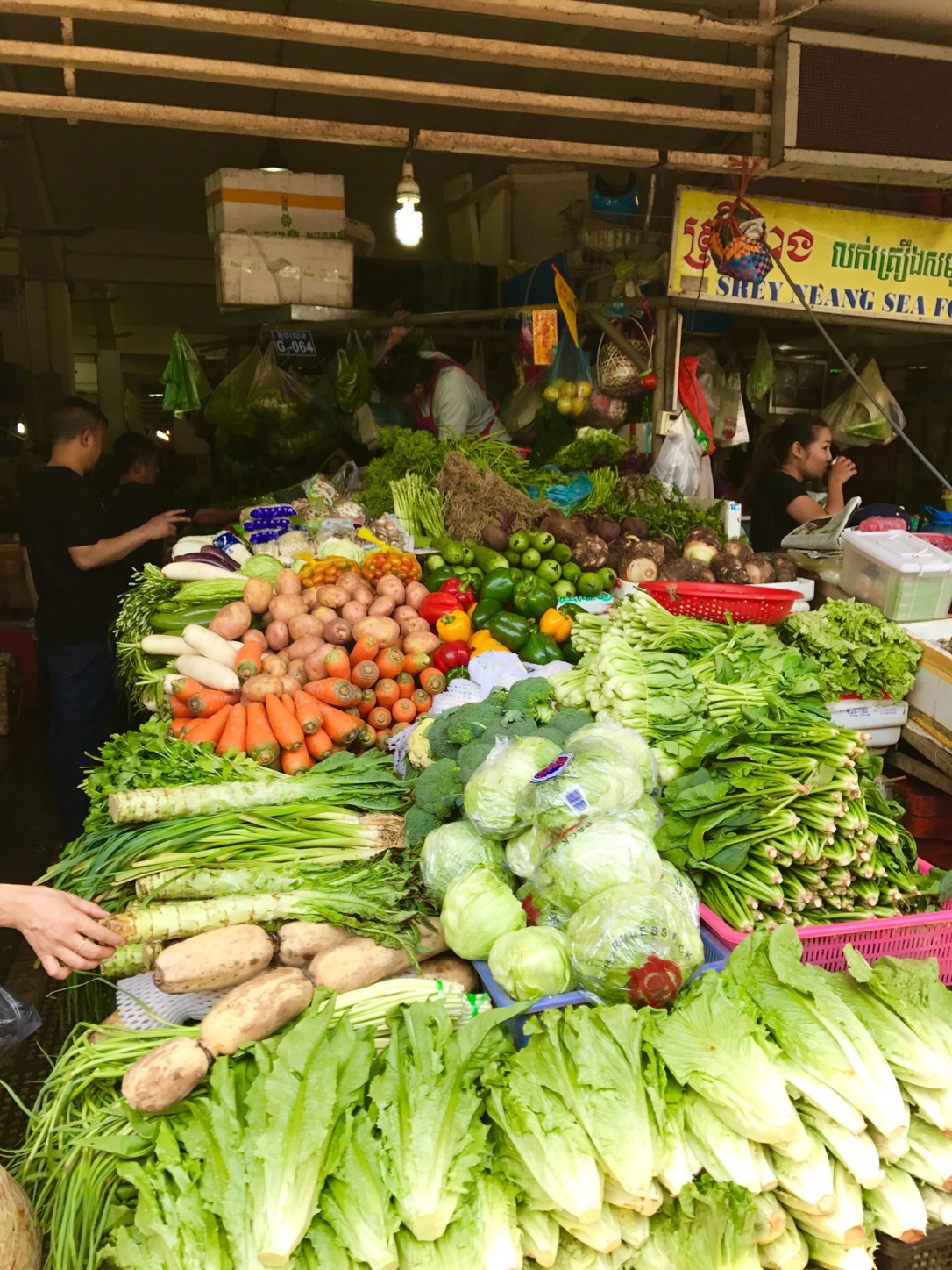 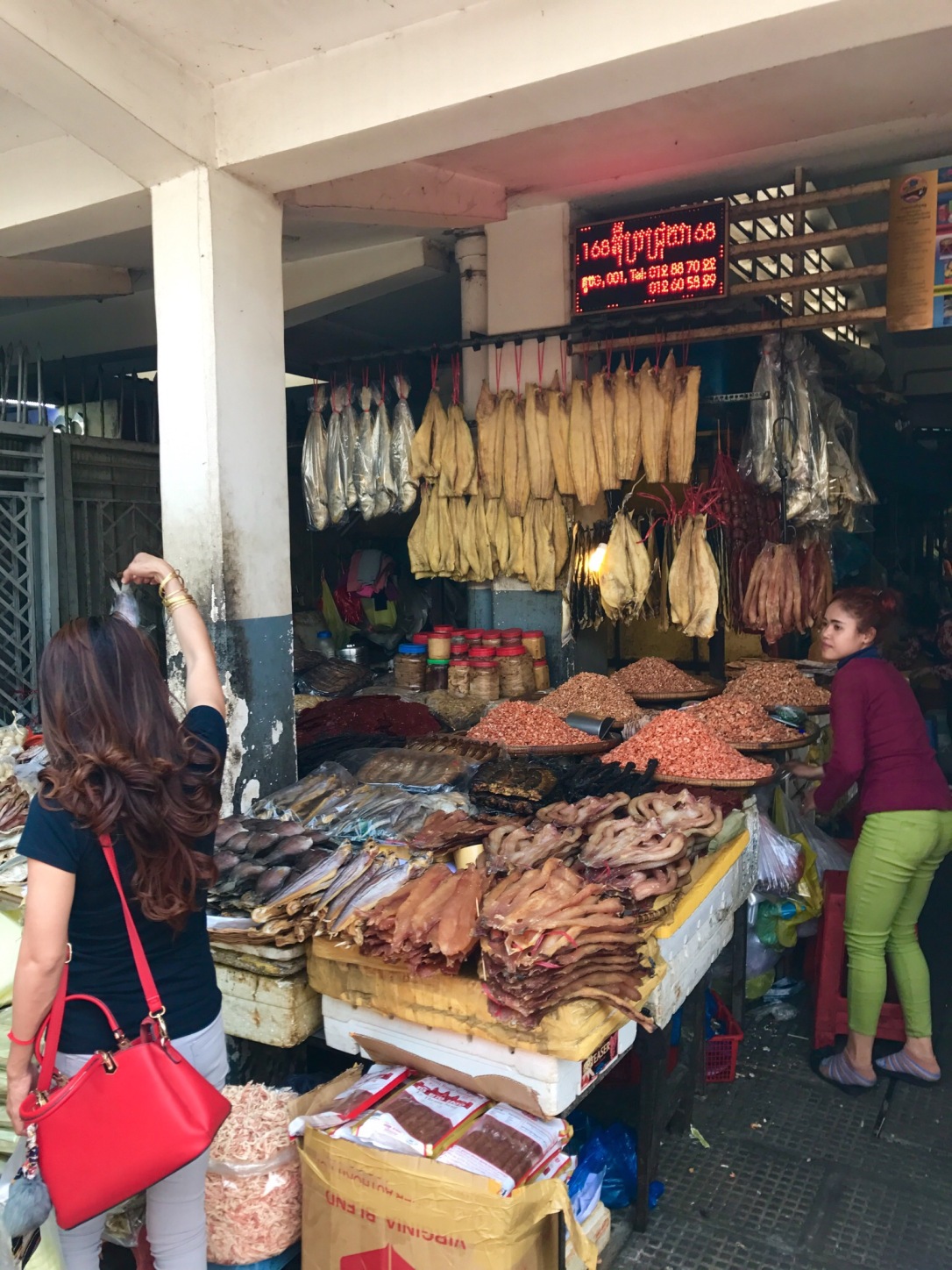 Of course there were temples to see! Lots of monks and people greet each other in the park. This happens especially at night, when carpets are placed on the floor and families gather for a picnic. 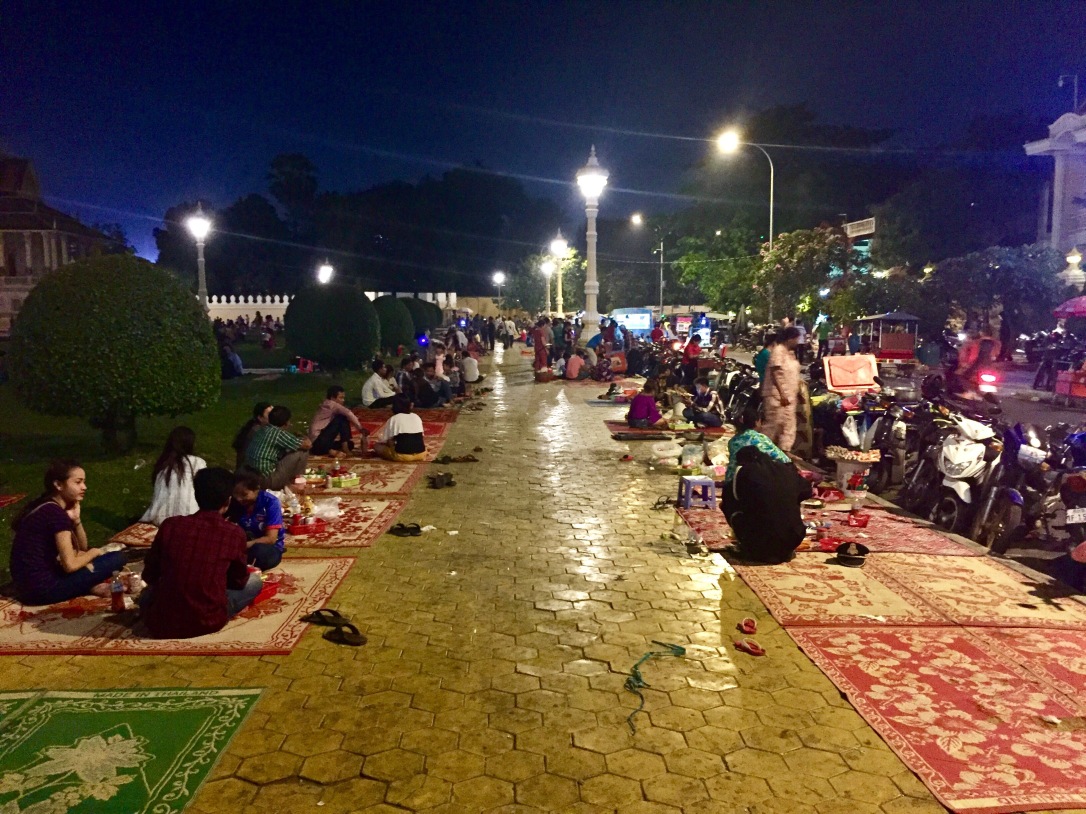 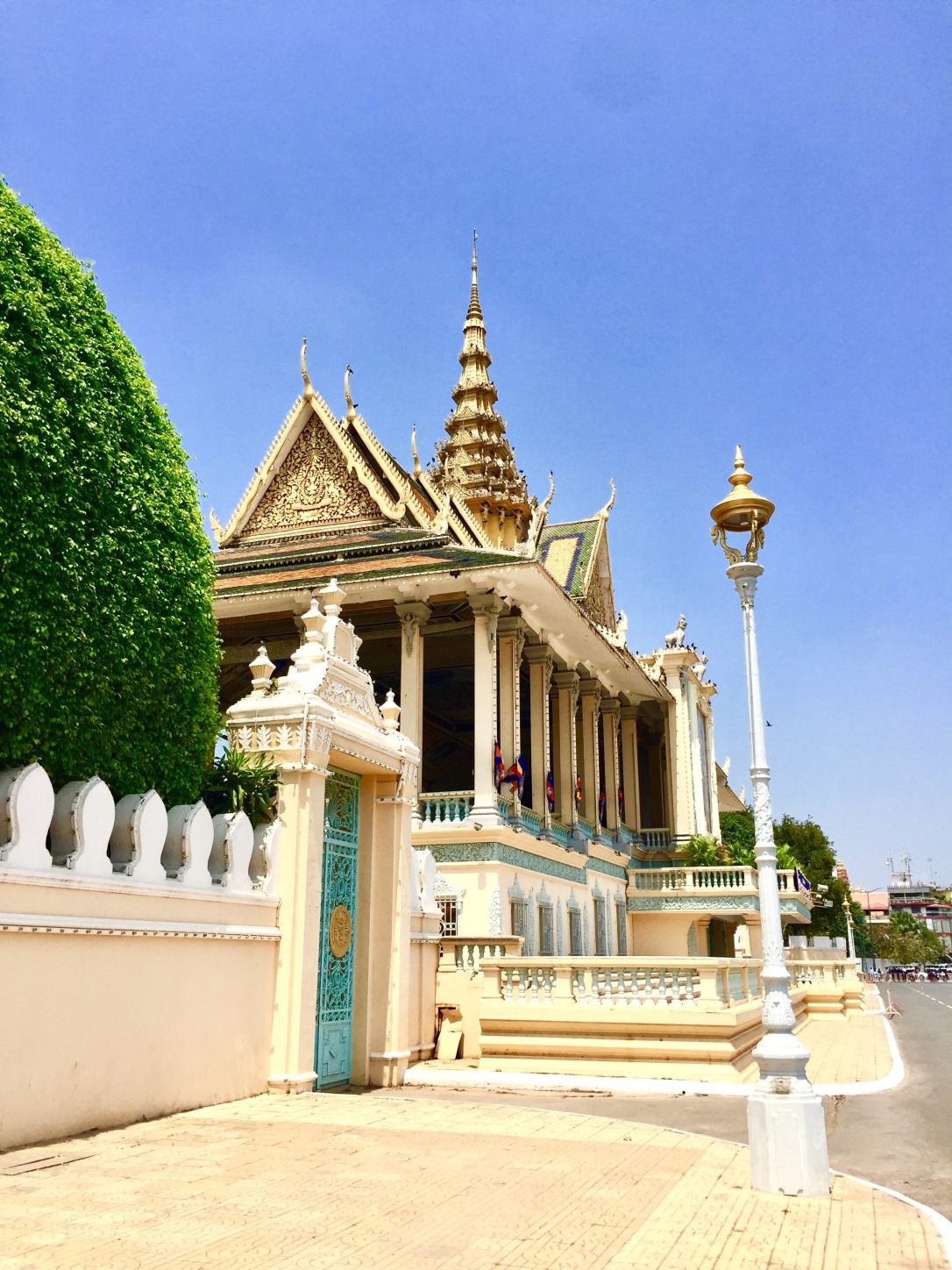 The killing fields were on our list to visit but we couldn’t face it after researching. Over 2 million people were killed in what was regarded as a broad-state sponsored genocide 😓

On our last morning we went down a little side street to a hipster cafe called Artillery. After pancakes and muesli I found an awesome vintage shop, Bee vintage and crafts next door. I bought an 80s polka dot top and almost this amazing folk boho dress in the photo below but I have no space in my backpack! 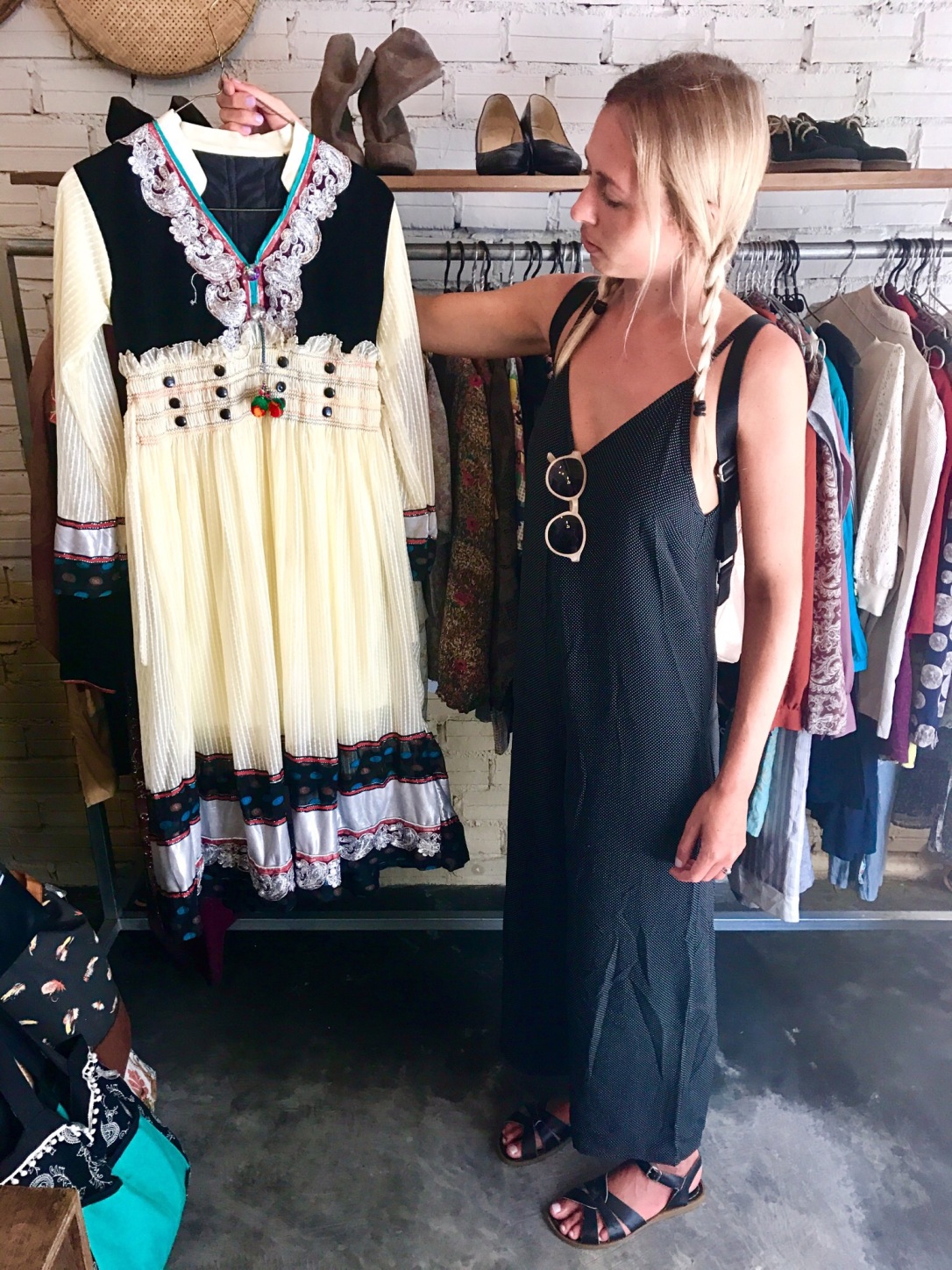 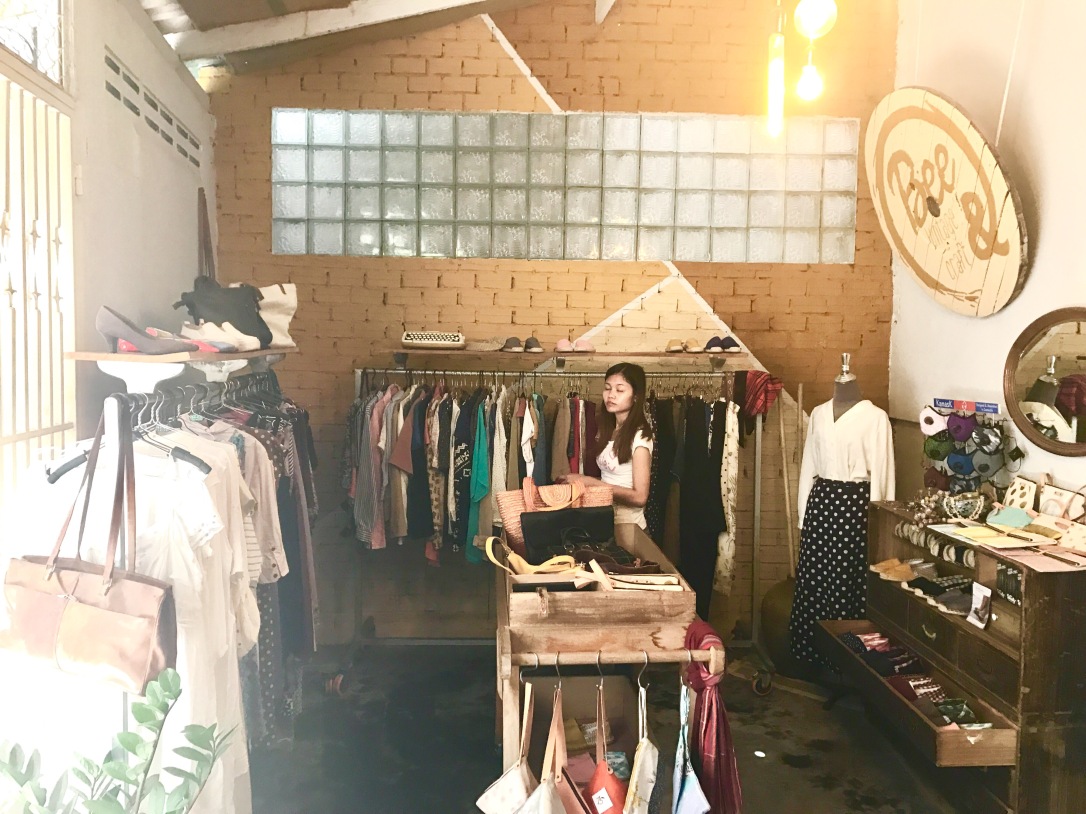 Seeing you in my old stomping ground Melbourne !!

Kelly, Hole in my pocket (holeinmypocket)